The picture on the left shows the anatomy of the Blue Ringed Octopus. 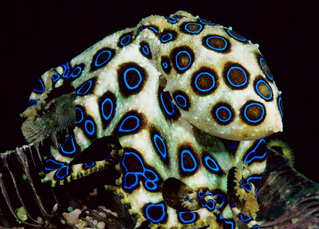 The Blue Ringed Octopus is
one of the few species of octopus that live in tide pools and coral reefs
throughout the Indian and Pacific Oceans. The Blue Ringed Octopus is one of the most venomous
animals in the sea and can even be dangerous to humans even considering their
very small size. These octopuses are recognized using the blue or black rings
throughout its body and its yellowish skin. Also the Blue ringed octopuses diet
usually consists of small crabs and shrimps. An
Blue Ringed Octopus grows at a very fast rate increasing it's weight by 5% every
day and once the octopus reaches adulthood it develops the urge to mate.
But soon after the octopus mates it dies. Next the octopus mates in an
unusual way. An octopus mates without any real mating ritual. Also a male
octopus mates using a modified arm called a hectocotylus. The
hectocotylus is about a meter long and holds the sperm for fertilization.
The Blue Ringed Octopus then will insert the hectocotylus into the females
oviduct but other octopus take the arm off and gives it to the female to store
in her mantle for when she is going to use it. When the Blue Ringed
Octopus inserts the arm into the oviduct the male releases its sperm
within the females body and fertilizes her eggs. But in other octopus cases, if
the hectoctylus is given to the female she keeps the arm until she lays her eggs
then releases the sperm in the hectocotylus to fertilize her eggs so they can
hatch and new life is created.

Blue Ringed Octopus Inserting His Hectocotylus Into The Females Funnel 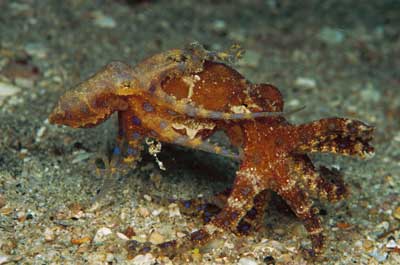 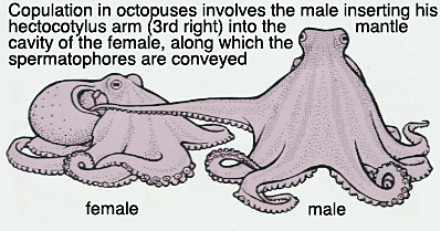