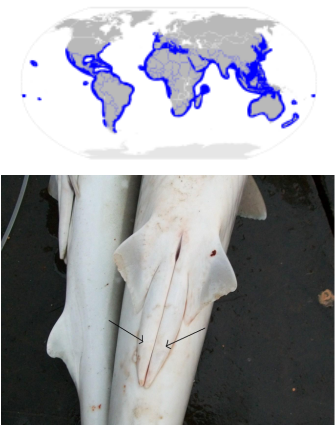 Hammerhead Sharks are a group of sharks that got their unusual name from the odd hamme like shape of their heads. Hammerhead sharks are found in warmer waters along coastlines and continental shelves. Hammerhead sharks are also a little different than other sharks considering the fact that they travel in schools of hammerhead's during the day than become solitary hunters in the night. Hammerhead Sharks usually can range from three to twenty feet in length and can range from seven to thirteen hundred pounds.

The Hammerhead Shark Reproduces internally and sexually. For Hammerhead Sharks reproduction only happens once a year and usually starts with the female giving of chemicals to tell the male she is ready. Than the male shark viciously biting the female in order to get her to mate with him. Once the female agrees to mate the male will release his sperm through his claspers (which act almost as the penis on a human or the bengal tiger) into the female to fertilize her egg. Then once the embryo is fertilized it is nourished by the yolk of the egg until there is no more and once there is no more yolk the embryo develops into something analogous to a mammalian placenta through which the mother deliver things to the baby. Once the pups are born (in liters of 15 - 20) the mother leaves them and doesn't care for them at all and even may eat them.