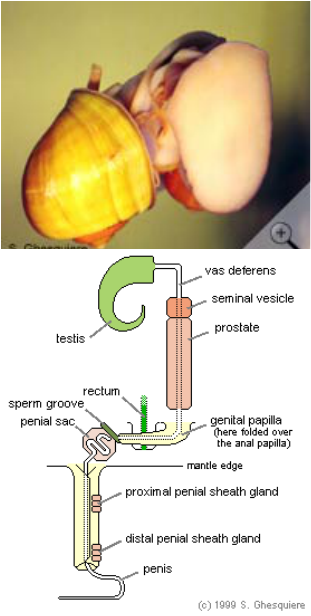 Apple snails reproduce sexually and internally. The male reproduction system consists of the testis and vas deferens, the seminal vesicle and the prostate gland, the penial sac, the penis, and the penis sheath. The yellow testis are found in coils on the upper part of the shell. The tubules inside the testis fuse to form the vas deferens. The vas deferens then passes down to the seminal vesicle where the sperm cells are stored. Then the prostate glsnd which is closely connected with the seminal vesicle and the prostate gland passes down the right margin of the mantle skirt , along the rectum and ends at the penial papilla. Then when mating the penial papillia bends toward the sperm groove where the sperm is conducted. Then from the sperm groove the sperm is conveyed in the penial duct at the base of the penis. The penis itself is held in the penial sac ( when it is not being used) and when mating the penis is out and erected. And when erected the penis is grasped by the penial sheath from the mantle. And using his penis the male leaves his sperm in the receptaculum seminis so the female can later fertilize her eggs.

In the case of the female she stores her eggs on her ovaries which is close to her spine and her digestive gland. Than when mating the egg is released when the egg is released it goes to the receptaculum seminis and this is where the sperm fro the male is stored and therefore several eggs can be fertilized at one time.
Powered by