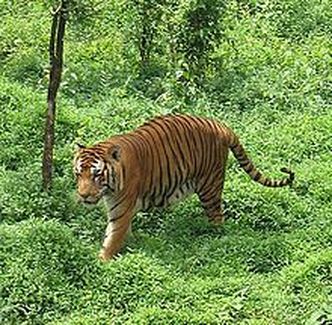 
The Bengal Tiger reproduces sexually. In the case of a tiger the female tells the male when she is ready to mate. And she does this by leaving scratch marks and urine on trees or by moaning. Female tigers become ready to mate at three and a half years of age while the male is ready at five years of age. Once both the male and female are ready they usually mate between the months of November through April with pregnancy being sixteen months.


The first step of the reproduction cycle is the female going into estrus (when the female is capable of getting pregnant) and this happens every three to nine weeks and it lasts about three to six days. But this depends on the climate the tiger is in. For example in tropical climates estrus can happen throughout the year but mostly in the coolest months, while in temperate climates estrus happens only during the winter.


Once the female is in estrus and a male comes to her they circle each other in a state of examination. Then once they are both accepting they begin to rub their bodies together and begin copulation. In this process the female who is considered an ovulator which means she lets out an egg from her ovaries and through the male inserting his penis into the females vagina he releases sperm therefore fertilizing the females egg. This then occurs briefly but frequently over the next five or six days to ensure the fertilization of the egg. Then just like a human the fertilized egg is moved into the womb of the female and stays there for sixteen months until the baby is born. Then once the baby is born the females organs move to their normal places. As you can see the tigers copulation is very much like the copulation of the Humans.

Sorry it is in a different language but the visual aspect of it will give you a good idea of what happens on the exterior.